ARE YOU MICRONUTRIENT DEFICIENT?

"You can trace every sickness, every disease, and every ailment to a mineral deficiency."
Dr. Linus Pauling, two-time Nobel Prize winner

The body only requires these nutrients in small amounts but they are vital to prevent disease and to maintain good health and wellbeing. Micronutrients are not produced by the body and must be derived from the food and water sources. Minerals are found in water and food sources in two states; The first state is Colloidal Trace Elements and Colloidal Minerals which are not readily absorbed by the body because of their large components. They require more energy to break down into smaller components so that they are not fully absorbed by the body. The second state is Ionic Trace Elements and Ionic Minerals. These are readily available (Bioavailable) because they are nano-constituents that carry an electric charge that is either a positive or a negative charge. These energized nutrients pass through the membranes of the cell to accomplish specific cellular level functions by moving these nutrients to organs and tissue that need nourishment. According to the "Encyclopedia of Natural Medicine," ionic mineral supplements, found in Lithia Spring Water can make you feel better and more energetic. Additionally, these types of mineral/trace element sources can help your body regulate hormones, enzymes, and amino acids. These biological processes have a direct effect on a number of body functions, such as nerve transmission, neuron transmission (brain), muscle contraction, and processes that require the transmission of electrical charges including neurotransmitters. Your body requires Ionic minerals and trace elements for optimal mental-physical health by supporting immune system function, energy, metabolism, antioxidant protection, and neuroprotection. 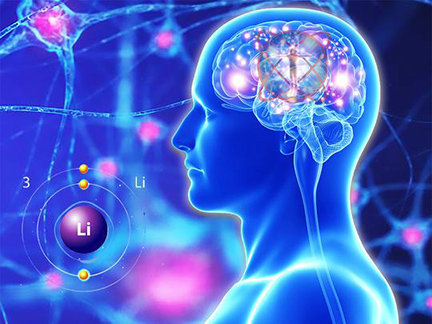 Is Your Brain Micronutrient Deficient?

Your brain requires a constant supply of the micronutrients Lithium, Magnesium, and Calcium for energy metabolism of neurons and glial cells. Micronutrient deficiencies may have adverse effects on cognition and mood. Lithium (Li3) is considered to be a micro- nutrient that may improve cognitive function, executive functions, focus, memory, creativity, and motivation. Scientific studies (found on the internet) suggest that micro-doses of Lithium may have the following benefit that may help elevate mood • Reduce anxiety • Reduce inflammation • Improve cognitive functions • Strengthen the immune system • Boost neuron energy modulation.

Your body and mind need essential ionic-nutrients daily. Lithia Spring Water is an excellent source of ionic micro-nutrient minerals and elements that are vital for your health and well-being. This rare nutrient rich natural alkaline mineral spring water, with a TDS (Total Dissolved Solids) of 2,200, supplies a full 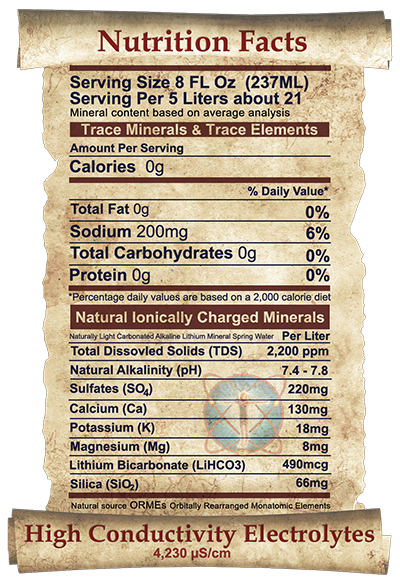 spectrum of bio-available ionic minerals, trace elements, Electrolytes, and ionic lithium (500 mcg/L). The World Health Organization is concerned that micronutrient deficiency is presenting a huge threat to the health of the world's growing populations. According to the "Encyclopedia of Natural Medicine", micronutrients help your body regulate hormones, enzymes, and amino acids. What makes Lithia Spring Water so amazing is its unique natural healthful formulation created by Mother Earth.

The World Health Organization considers Lithium to be a nutrient trace element. This rare elemental nutrient is naturally found in fruits, vegetables, and other plants, but only in some areas where the soil contains lithium. Human dietary lithium intakes depend on location and the type of foods consumed and vary over a wide range. Traces of lithium were detected in human organs and fetal tissues already in the late 19th century, leading to early suggestions as to possible specific functions in the organism. Many nutrition and health experts believe that daily consumption of up to 1-2 mg of lithium may be necessary for many important cellular interactions. At those trace amount levels, lithium seems to carry no risk of side effects, and several major studies in the 1970s suggest that there may be some very important health benefits. Other studies suggest that the American population may be suffering from Lithium deficiencies. Since the 1970’s there has been a growing body of research that supports the benefits of lithium as an important micronutrient. If you search the Internet for “Lithium as a Nutrient” you will discover a very large body of information and independent research studies written by the scientist, doctors, and researchers that will simply amaze you about how trace amounts of Lithium can benefit your health.

Lithia Spring Water naturally contains ionic minerals. The body readily absorbs ionic minerals through the intestinal tract’s membrane lining that has specific electrical charges in the form of ionic receptors. Because of these receptors, ionic minerals are highly bio-available, allowing them to be easily assimilated through selectively permeable cell membranes, feeding them nutrients.

Lithia Spring Water is extremely helpful in hydration by replenishing essential minerals and trace elements that balance your body's electrolytes. It also contains ionic sulfates that may assist your liver in detoxifying your body of potentially harmful toxins and oxidants that impact your body's health negatively.

Lithia Spring Water flows from an ancient Native American Indian healing spring where for thousands of years people journeyed to drink its health-giving water. Since 1888 this health enhancing mineral spring water has been bottled and delivered to the homes and offices of health seekers. You can now order home or office delivery direct from the source, Lithia Springs GA.

1874 Doctor Office, Lithia Springs GA
For well over 60 years Dr. Garret's small vintage house, made from native pine wood, was both his health clinic and a hospital. Dr. Garret believed in the health-giving properties of Lithia Spring Water and prescribed it for many types of ailments. The local people still drink Lithia Spring Water and they remember Dr. Garret, a true healer.
Lithia Spring Water Logo
Our Lithia Spring Water logo embodies the nostalgic era and the modern era. The logo depicts a human life force being refreshed inside a lithium atom. Look carefully there are 3 electrons with 2 forming inverted hearts. Scientific research suggests lithium may be an essential micro-nutrient for health and well-being.
Scientific Research Lithia Water
Lithia Water is defined as a mineral water that naturally contains trace amounts of Lithium (Li3). This type of water is one of the most independently scientifically researched mineral waters in the world, because of its health-giving properties that are well attested. The World Health Organization considers Lithium a mineral nutrient.

Nutrient Rich Lithia Spring Water Alkaline pH 7.4 is perfectly balanced with the human body and is beneficial for human health and well-being.